April 06, 2013
Continuing with the Recovery Tracking series in its third edition, we look at business and consumer confidence in the US, UK and Eurozone, comparing them to the situation from 6 months ago. The OECD once again offers the database of tracking these indicators, in particular the Business Confidence Indicator (BCI) and the Consumer Confidence Indicator (CCI). As I've mentioned in the previous post, the consumer and business confidence indicators will give us a more precise picture on the effects of Draghi's speech,  and whether or not ECB's actions came through where they haven't done so before (recall the previous actions done in August 2011, December 2011, April 2012, and so on, when the effect on business and consumer confidence was either negligible or nonexistent).

Business confidence
So far, by simply looking at the main OECD business confidence indicators, it seems that things started to improve for businesses in most of European countries over the past 6 months, except for USA and Britain. They are the only ones experiencing a slight decline. For the US this was expected due to the fiscal cliff bargaining by the end of last year, while for the UK it does come as a bit of a surprise, since most of Europe's businesses were increasing in their confidence. I have included in each graph a straight line which is suppose to correspond to Mario Draghi's speech from the end of July 2012. It seems that businesses in many European (peripheral) countries took this "momentum" as a welcomed solution from the ECB. Greece is particularly encouraging as this is the first indicator that is starting to show good news for Greece in a long time. I have also included the upper right graph on the Nordic countries, where it was quite obvious that their business climate over the past couple of years was dependent on how things were shaping up in the rest of Europe at the time (with a certain lag of course).

So far so good. Things are starting to improve, businesses are gaining more confidence, but Europe is still vulnerable to outside shocks, like the one in Cyprus. It will be interesting to see the reaction to this shock in a few months time.

Consumers were more careful, but even this data is showing sings of improvement, especially in the peripheral Eurozone economies. Although you can notice that the consumer confidence indicator didn't react immediately after the Draghi momentum as the business confidence did. This is normal as it takes time for the business confidence to translate into more investments, more expansion and more new jobs. With higher employment, aggregate consumer confidence will improve and eventually yield an increase in aggregate spending. This still has yet to happen in Eurozone, but the favourable conditions were created. Now it takes time to wait and see and hope for the best - which isn't the best possible solution out there, but with lack of political will to solve serious issues, I guess we're stuck with it.

However, to end on a more serious note, a survey done by the FT and the Economist with the final data for Q1 2013 point out that even though "overall confidence, measured as the balance of respondents who think global business conditions will improve against those who expect them to get worse, rose from a dismal minus 11 percentage points in the last quarter of 2012 to plus seven in the first quarter of 2013", a lot of businesses (around 80%, see graph below) still feel that the crisis is not over, and are skeptical on the current regulatory solutions. Also, one of the conclusions was that some of the new growing confidence is yet to be translated into new job opportunities (which is probably why we haven't yet seen a strong upward shift in consumer confidence from the graphs above).

Here are some of the figures depicting this sentiment: 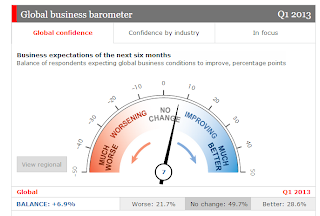 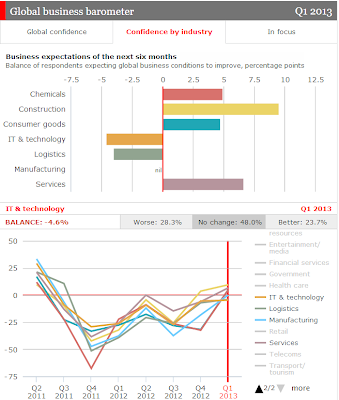 Global confidence is improving for the first time since 2011, with some industries (like construction, services, chemicals and consumer goods) driving this positive change, while others are still in relative decline or stagnation (manufacturing being the most problematic since the start of the crisis).

Finally, the Markit Eurozone PMI (purchasing managers' index) indicator is showing a steady decline for the first quarter of 2013 (latest data in March), thanks to a contraction of business activity, which still means that the recovery in Eurozone is in a very fragile state.
Business Business Cycle Confidence Eurozone Recovery UK USA