April 03, 2013
After two brief intermissions which I simply had to comment on, the Tracking the recovery series continues in its third edition featuring Eurozone and the UK. This analysis, unlike the US one, will constrain itself only on observing the leading indicators from the OECD database and the Conference Board, and compare these to their levels from 6 months ago. (Note: World Economics also has a decent overview of the recovery at their pages; they refer to it as Growth Monitors. Here is their Eurozone Growth Monitor).


As I've pointed out in the previous post, last year was apparently much better for America than it was for Europe. The graph below sums it up pretty well: 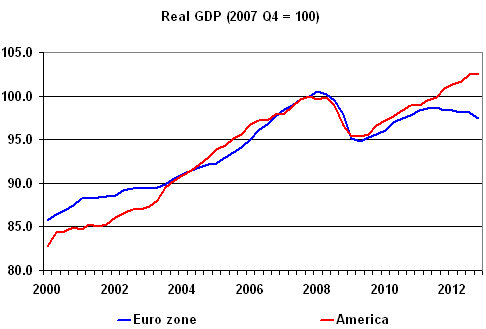 While the US was mildly recovering, Eurozone started to diverge into a double-dip recession (adding the stagnating UK into the above graph will only worsen the picture). The events from the begining of last year following the uncertainty in Greece and Spain, were extended to Italy and Cyprus this year, and further problems in Greece and Spain. Mario Draghi's "do whatever it takes" speech was enough for a brief turning point in Europe, but the real effects won't be visible until real reforms start (which was the initial idea behind ECB's actions - let's help the economies reform by supporitng them through easier monetary policy. Moral hazard problems still loom). The final effects of all the events from last year on business and consumer confidence will be available in the next blog post. For now we just focus on assesing the leading economic indicators to anticipate until when will Europe's "recovery" last.

As always we begin by looking at the Eurozone leading indicator (LEI) published by the Conference Board. The LEI in their graph is compared to the Conicident economic index (measuring current economic activity) and the RGDP, both of which seem to be declining. (click on image to enlarge)

The LEI itself (blue line) is also not particularly impressive. Observe the critical juncture of August 2011 and how the LEI started to decrease significantly after that, only to recover briefly in the start of 2012, and the descended back into stagnation only to improve marginally by the end of last year. In the past few months, as can be seen in the graph it has been stagnating, thus signalling further hardship in Europe and still no sign of any robust recovery any time soon.

According to this stagnation of the LEI, it seems that my predictions from last July were correct. I said back then:

"Looking deeper into this can we conclude of a European double-dip, similar to what the UK is experiencing at the moment? Not really, I would rather refer to this situation as 'levitating in a status quo', with dire consequences of inaction."

That precisely depicts the current situation in Europe. And unfortunately it's not showing any signs of change (according to all possible indicators: LEI, the current set of unchanged faulty economic policies, lack of real reforms, and the upcoming uncertainty resulting from the Cyprus shock).

Moving on, the OECD business cycle database offers an opportunity to look at the indicators for individual Eurozone countries and compare the recovery for each of them. 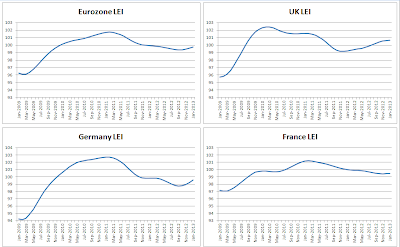 The last available data is for January 2013. So the recent events still haven't translated into the LEI. Since the last time I looked at this data (May 2012) the situation is surprisingly better. Particularly for Portugal and Greece, whilst Spain and Italy seem to be showing slow positive signs of higher future economic activity. France is the only country that seems to be at a declining path, while Germany and the UK are signaling slightly better times to come. The Eurozone as a whole seems to have shown some improvement by the end of last year (as the Conference Board index from above seems to suggest as well), however, it is likely that recent shocks will slow down this increase (as was shown for the January and February data in the Conference Board indicator).

As for the predictions, I anticipated the Spanish LEI to show a declining trend in the summer months. However that didn't happen, and one of the reasons for this (as for the positive trends in other peripheral economies' leading indicators) could have been the Draghi speech from last July. It's around that time when things start changing in a more positive direction (even in Germany). It still remains to be seen how this spur of confidence in the leading indicator was reflected onto market participants (businesses and consumers).

Generally from observing the individual country LEIs it could be inferred that the recovery is on its way in Europe, while it really isn't. I have concluded last time that using this methodology doesn't give us precise leading data, as it generally reacts only to ex-post changes. I stand with that conclusion since there is too much uncertainty in Europe and too much potential exogenous shocks that even in small magnitudes can cause great instability, for the LEI to make a plausible prediction of future economic activity. In Europe we should still pay more attention to announcements and implementation of economic policies. Until we see some significant improvement in pledging to reform, we will not see a recovery.
Business Cycle Eurozone Germany Greece Italy Portugal Recovery Spain UK