October 02, 2014
Back to blogging after a short break. I recently came across an older, 2010 article from Scot Sumner on Econlog, where he discussed the neoliberal revolution that began in the late 1970s. A very good text, explaining first of all the confusion over the term 'liberal' and what 'neoliberal' stands for (it "combines the free markets of classical liberalism with the income transfers of modern liberalism"), the confusion of associating neoliberal policies with right-wing political views (since most European countries that have actually been the best neoliberal reformers were social-democratic Nordic countries like Denmark - all hail the Nordic model!), to the very substantial evidence on how the most adamant neoliberal reformers quickly caught up the lost growth of the previous decades, particularly in terms of income p/c. From Britain's success in Thatcher times (where it grew much faster in the 80-ies and the 90-ies than most other European economies), to Australia, Canada, Hong Kong, Singapore, Sweden and of course the US, all of which grew much faster than their relatively more statist counterparts.

He also explains the problems of perception of and implementation of neoliberalism in Latin America and the transitional economies of the former Soviet bloc. One particularly important issue with transitional economies is an introduction of democracy (free elections) before establishing an effective rule of law and the judicial system (a mistake many of the Arab spring countries are repeating today - elections are not a sufficient condition for a democracy). Because of this, the privatization process in transitional economies became subject to distortions and criminalization, which is at the very center of the critique against neoliberal reforms in transitional economies - that they favor big capital and run over the 'little man'. This is far from the truth, as Sumner also points out:

"A few years ago, I researched the relationship between cultural attitudes and neoliberal reforms among the developed countries. It turns out that, between 1980 and 2005, those countries with more idealistic or civic-minded cultures (as indicated by surveys on attitudes toward the common good and by indices of corruption) tended to reform their economies much more rapidly than countries with less civic-minded attitudes. Interestingly, Denmark has by far the most civic-minded culture in the group of 32 developed countries, and, as noted above, ended up with the least statist economic system in the Heritage's 2008 rankings (excluding the two size-of-government categories). Greece has the least civic-minded attitudes and ended up with the most statist economy in 2008. Far from being a right-wing plot to enrich corporations, the neoliberal revolution was liberal in the truest sense of the term: a rational response by idealistic policymakers to the increasingly obvious failure of statist economic models in the 1970s and 1980s."

Finally, the results are clearly visible today. More economic freedom (a model close to that of the Nordic economies) implies higher per capita income, i.e. higher living standards. It all comes down to incentives for wealth creation. If the country has build (reformed) its institutional system to support wealth creation, success will not be eluded (but it will always be a rough and long process - see here, here, or here)
This entire story reminded me of a text published on VoxEU a few months ago, measuring the long term impact and presence of economic liberty.

Here are the results (read about the methodology here): 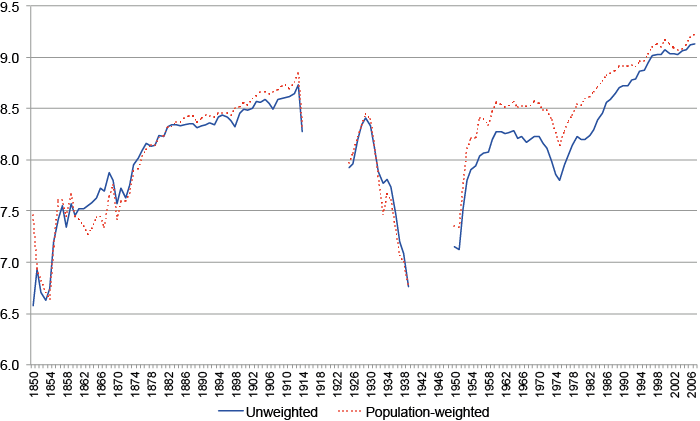 Observing this long run pattern of economic liberty one can't help at noticing a strong correlation between economic freedom and positive development patterns (higher growth, rising living standards, technological improvements etc.). Whenever economic freedom even slightly declined there were problems for societies. Naturally more research needs to be done to start inferring any causal relationship here, but intuitively it makes a lot of sense.

Notice the huge drop in economic liberty between the two World Wars (particularly on the lower, bar graph; the period between 1910 and 1950 was characterized by a huge decline in free trade). This reinforces an argument I was making in my essays on democracy (see here, here and here) - back then the people blamed liberalism and laissez-faire capitalism in a desire to achieve an alternative to their existing pattern of democracy. However, that period remains as one of the darkest in the 20th century and arguably in human history. Particularly after the start of the Great Depression where the world emerged into protectionism and state interventionism. Economic freedom was wrongfully accused of triggering crises.


In the 1960s and the 1970s the same pattern of state interventionsim reemerged, under fears that the Soviet bloc is winning the battle of ideas. However in the 1980s, as Sumner's text shows, the clear victor emerged. And economic growth and living standards once again skyrocketed.
Democracy Development Economic Freedom Economic history Economic theory Institutions Philosophy Political economy